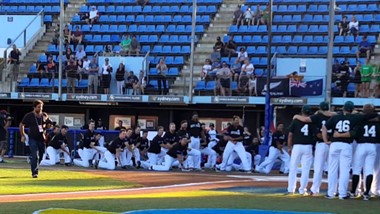 Baseball New Zealand are proud to announce the twenty-eight players selected for the DiamondBlacks, who will compete in the upcoming World Baseball Classic (WBC) Qualifiers held in Panama City, Panama, from September 30th – October 5th.

Manager Scott Campbell is excited by the group’s potential, with the experienced line-up balanced out by an exciting young pitching staff led by Diamondblacks veterans Ben Thompson and Jimmy Boyce. The Diamondblacks have spent the last week preparing in Arizona, with the coaching staff using games against the Kansas City Royals instructional team and Gateway College to evaluate the roster before their first game against Brazil on September 30th in Panama.

The upcoming tournament will be familiar territory for some, with Max Brown, Te Wera Bishop, Daniel Lamb-Hunt, and Andrew Marck returning for their third World Baseball Classic qualifiers after being members of the 2012 and 2016 squads, which travelled to Taipei and Sydney respectively.

The introduction of the Auckland Tuatara franchise in 2018 is paying dividends for Baseball New Zealand, with seventeen of the players included in the roster having been involved in the Tuatara set-up during their first two seasons, and a strong WBC performance will likely lead to this number growing during the 22/23 ABL season.

The Diamondblacks have completed their warm-up tour in Arizona after spending the last three days being generously hosted by the San Diego Padres and will depart to Panama on September 27th. The Diamondblacks first game is against Brazil at Rod Carew National Stadium, with all games throughout the tournament live streamed for free on Youtube & MLB.TV. First pitch against Brazil is scheduled for 7am, October 1st NZT.